Leading national public health advocates filed a Citizen Petition on April 12, 2013, urging the U.S. Food and Drug Administration (FDA) to exercise its regulatory power, and to protect America’s health by prohibiting menthol as a characterizing flavoring in cigarettes. The historic menthol petition was delivered to FDA offices by the Tobacco Control Legal Consortium on behalf of 19 public health organizations. 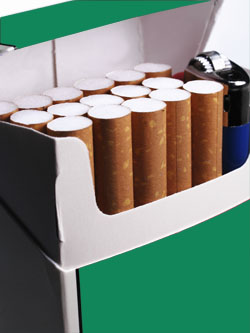 In 2009, Congress passed the Family Smoking Prevention and Tobacco Control Act. Among other things, the law prohibited the use of fruity and candy-like “characterizing flavors” in cigarettes and cigarette smoke. The flavor prohibition was specifically intended to prevent young people from being lured to try — and to become addicted to — a lethal product. Menthol was the one flavor exempt from the law, but Congress gave the FDA the authority to prohibit menthol if “appropriate for public health.” The law made the issue of menthol in cigarettes a priority for FDA consideration and directed its newly formed Tobacco Product Scientific Advisory Committee (TPSAC) to study the issue. AlthoughTPSAC’s Menthol Report, issued in March 2011, concluded “Removal of menthol cigarettes from the marketplace would benefit public health in the United States,” the FDA yet to act.

Why is it so urgent for the FDA to act on the health hazards posed by menthol in cigarettes? As a vast body of scientific evidencemakes clear, menthol makes it easier to start smoking and harder to quit. Menthol cigarettes are the source of addiction for nearly half of all teen smokers. What’s more, both young smokers and communities of color are disproportionately impacted by the availability of menthol cigarettes. While 24 percent of white smokers smoke menthol cigarettes, they are used at much higher rates by ethnic and racial minorities, such as African American (83 percent), Native Hawaiian or Pacific Islanders (53 percent), Hispanics or Latinos (32 percent), and Asian Americans (31 percent).

The health benefits of prohibiting menthol cigarettes are also clear. In fact, one model estimates that if menthol was prohibited as a characterizing flavor in cigarettes, between 2010 and 2020, over 2.2 million would not start smoking. By 2050, the number of people who would not smoke would be 9 million. Another leading model of smoking in the United States predicts that a 10% quit rate among menthol smokers would save thousands of lives, preventing over 4,000 smoking-attributable deaths in the first ten years, and 300,000 lives would be saved over 40 years.  Approximately 100,000 of those whose lives would be saved would be African American.

Now that the Citizen Petition has been filed, the FDA will begin a formal process that includes opening a docket onwww.regulations.gov to accept public comments. This will give the public, including public health professionals and advocates, an opportunity to submit information and evidence regarding the devastating health consequences of menthol cigarettes. As soon as the menthol docket is available, the Tobacco Control Legal Consortium will send an FDA Action Alert notifying the public health community of the opportunity to comment. Those who would like to receive this notice should email the Consortium.

Prohibiting menthol in cigarettes is a powerful measure that is readily available to the FDA to improve America’s health, and is core to the agency’s responsibility to implement the Family Smoking Prevention and Tobacco Control Act for the welfare of the nation. The science on this issue justifies immediate action to reduce the human toll resulting from mentho­lated tobacco products. There is no public health justification for refusing to act.